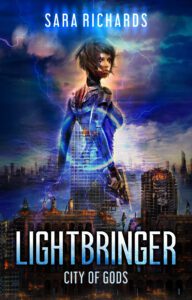 The Knights of Ancora.

Heroes protecting the city—and the people hunting her down.

Created to steal superhuman powers, Danielle Langston went underground in the city of Ancora since she put the man she loves in a coma. A distraction from her self-hatred comes in the form of a shady deal: a miraculous cure in exchange for a dangerous artifact guarded by the Knights. But the robbery turns into a train wreck when Danielle severely injures their leader, cementing her place at the head of their shit list.

Raleigh West has been a Knight of Ancora for five years—and called Soul-Eater in terrified whispers for just as long. After his best friend is nearly killed by a nobody girl with a power as deadly as his own, Raleigh makes it his life’s mission to track her down—and make her pay.

Trapped in a conspiracy threatening the city, Danielle and Raleigh are forced to team up despite the explosive animosity between them. To save both Ancora and the men in their hearts, they must unravel a web of lies, betrayal and deceit to unlock the key to their true powers.

Lightbringer is a fast-paced adventure that combines superhero lore and fantastical powers into a high-octane science fiction and fantasy thrill.